DC 2P 63A MCB TOMC7-63, 63-ampere current rating, excellent breaking capability of 3kA, and B, C, and D curves are optional to meet the different needs of applications.1.Protection against both overload and short circuit.

63A 2P DC MCB TOMC7-63 can connect, carry, and break the current under normal circuit conditions.

It is a mechanical switching device that can be turned on, carry a certain period of time or automatically disconnect under specified abnormal circuit conditions (such as short-circuit current).

DC 2P 63A MCB TOMC7-63 can be cascaded to enhance current limiting capabilities. 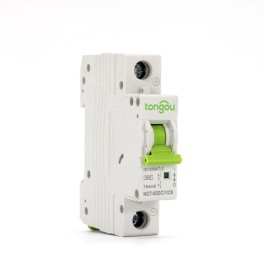