Miniature circuit breaker with 4 poles, 63-ampere current rating, excellent breaking capability of 4.5kA at 110/220V AC voltage, and B, C and D curves are optional to meet the different needs of applications.

1. Protection against both overload and short circuit

3. Particular devices such as surge protective devices, surge arresters, etc are recommended to install at upstream line to MCB as a precaution against potential surge voltage and current occurring at its power input side.

4. Appropriate tripping curve being chosen and properly installed, MCB trips and switches off its protected circuit in case of a fault, and thus provides protection against electric shock. 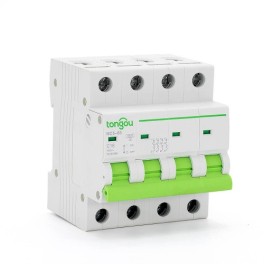